A recently published article analyses fishing activities of the Soviet Union in relation to all large marine ecosystems of the world from 1950 until the collapse of the union in 1991. Photo: S. Zeff/Azote

An empire of fisheries

Today, climate change is often seen as the most important global driver of change in the ocean environment.

In a globalized world, however, also socio-economic factors like trade and power dynamics can exert strong and globally persistent pressures across marine ecosystems.

This is the conclusion of Henrik Österblom and Carl Folke, who recently published a paper entitled "Globalization, marine regime shifts and the Soviet Union" in Philosophical Transactions of the Royal Society—Biological Sciences. 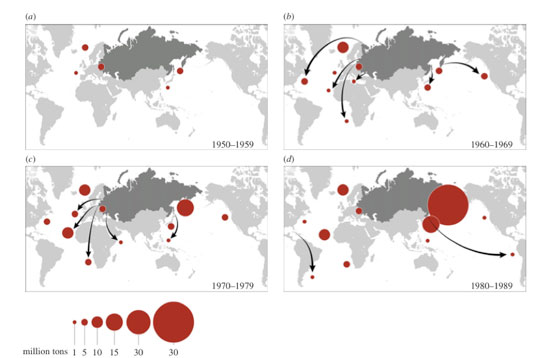 Figure 1 from the article: Global expansion of Soviet fishing activities, measured as the sum of catches in the 1950 s, 1960s, 1970s, and 1980s, for 65 large marine ecosystems in 18 regions. The expansion originated from harbours like Murmansk, Kaliningrad, and Vladivostok. Catch data from the Sea Around Us Project.

Political and economical aspects
The new study analyses fishing activities of the Soviet Union in relation to all large marine ecosystems of the world from 1950 until the collapse of the union in 1991.

This clearly indicated that one single powerful actor can have a disproportionately large effect on global fisheries with profound influences on marine ecosystem dynamics and regime shifts.

"Sustainable management of marine ecosystems is not just a matter of fisheries decisions, but also requires understanding of major actors and how they are embedded in political and economic tensions and power dynamics"

"From a governance perspective, understanding political and economical aspects of marine regime shifts are central to protect healthy oceans, regenerate ecosystems that are in decline, and increase the benefits that marine systems provide to communities around the world," explains Carl Folke.

Soviet fishing activities were coordinated through a system of central planning and accounted for close to 20% of global catches in its peak years. Global synchronicity can thus also result from human activities, and not just global patterns of climate. Interestingly, Soviet fishing also contributed to triggering regional and global governance responses for improved management.

Unique data set
Österblom and Folke base their results on unique data from the Sea Around Us project. It provides a globally consistent reporting of wild marine fisheries catches, based on FAO (Food and Agriculture Organization of the UN) statistics.

Data for 65 individual large marine ecosystems were analysed at the scale commonly used for examining marine regime shifts. The changes in catches of the Soviet Union, and other major fishing nations, were then related to well-documented marine regime shifts in the Baltic Sea, the Black Sea and the Scotian Shelf. In these areas, fishing has been described as a key mechanism for marine regime shifts.

The study also looked into Soviet fishing in relation to regime shifts in the North Pacific, the Humbolt upwelling system, the Oyashio Current and the Sea of Japan/East Sea –areas that have been described as primarily influenced by climate. Moreover, the Benguela Current and the North Sea, where there does not appear to be consensus about mechanisms, were studied. Finally, Österblom and Folke examined the Antarctic, the Barents Sea and the Mediterranean Sea, all representing areas that have been less intensely studied in the context of marine regime shifts.

Power dynamics
The rapid expansion and pervasive role of the Soviet Union in fisheries world-wide illustrates the importance of studying the role of key actors and how they influence and drive marine ecosystem dynamics.

"Sustainable management of marine ecosystems is not just a matter of fisheries decisions, but also requires understanding of major actors and how they are embedded in political and economic tensions and power dynamics," says Henrik Österblom.

Carl Folke is the Science Director of the Stockholm Resilience Centre. He has extensive experience in transdisciplinary collaboration and has worked with ecosystem dynamics and services as well as the social and economic dimension of ecosystem management.