In a recent publication centre researchers look into forced resilience in systems of intensive agriculture, forestry, fisheries and aquaculture. Photo: B. Ekberg/Azote Images

The hidden cost of coerced resilience

This is currently holding many systems in what would otherwise be unstable states, something that potentially can lead to the loss of alternative options for the future, concludes Centre researchers Magnus Nyström, Max Troell and Henrik Österblom, among others, in a recent article in the journal Ecosphere.

"When applying the traditional resilience framework it becomes obvious that many production systems would not be able to sustain the state they're in, without human inputs," says Magnus Nyström.

Productivity at the expense of resilience
Inputs such as fertilizers and pesticides play large roles in determining system dynamics and outputs of production ecosystems. In general, this is leading to a "coercion" of resilience that does allow for high levels of production, but often comes with a range of negative effects on ecological resilience in the modified system as well as in other supporting ecosystems.

In order to deal adequately with systems where anthropogenic inputs drive the system dynamics, the authors suggest a change of perspective and management.

"In the long run it will be crucial to bolster natural supporting processes like crop pollination, the maintenance of soil fertility, and biological control, rather than continue increasing reliance on anthropogenic inputs" 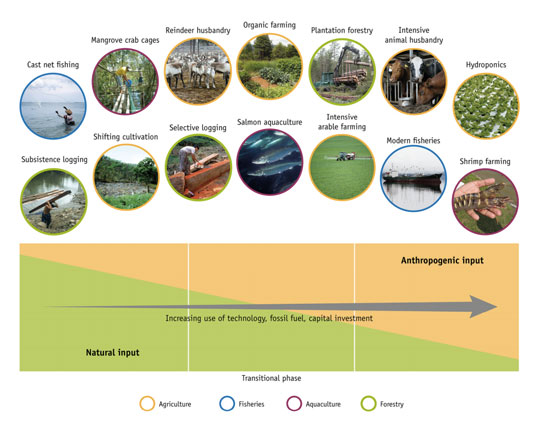 Figure 2 in the publication is an  illustration of inputs from anthropogenic sources and natural sources in key production systems. The production systems to the left side of the figure, rely mainly on local ecosystems and retain a wider range of options for unforeseen future requirements, thereby they also provide clearer feedback about how close the system is to ecological thresholds than the systems on the right which require significant anthropogenic inputs.

Likewise, sustained overfishing tends to result in substantial changes in species composition and biodiversity in many marine ecosystems whereas intensive aquaculture can entail pollution from chemicals, antibiotics and waste products.

Based on such case studies, the authors propose three general outcomes of coercing resilience in production systems.

Firstly, this can lead to permanent but masked loss of ecological functions, e.g. declines in pollinators and the parallel declines in the crop plants that rely upon them.

Secondly, this might entail increased cross-boundary interactions between systems, meaning that the external effects imposed by one production system can undermine the capacity for long-term production and resilience of another (e.g. soybean feed produced in Brazil for Europe's livestock).

Thirdly, coerced resilience has its limits owing to global limits to our ability to force resilience in production systems (e.g. continued external inputs are ultimately limited by finite resources, such as fossil-fuel based energy and phosphorus).

Unwanted resilience
The expanded use of the resilience framework proposed in the new study might improve our understanding of how people and ecosystems interact in agriculture, forestry and other production systems, the authors say.

In fact, the new article reveals that resilience may not always be a good thing, particularly when it exhibits itself as the resilience of unsustainable intensive production systems that are managed to exclude changes and surprises, with increased risk for large-scale collapses.

Another challenge pointed out by the authors is that the global interconnectedness of many production systems can camouflage signals indicating resilience loss in supporting ecosystems.

"Enhancing true resilience in the larger landscapes and seascapes will require a mixture of interventions and a clear understanding of the nature of coerced resilience," concludes Henrik Österblom.

Magnus Nyström's research is focused on the effects from human interventions, such as climate change, overfishing (including trade) and pollution, on ecosystem functions and processes - and how this impacts on resilience in ecological and social-ecological systems.

Max Troell is a system ecologist at   the Centre the Beijer Institute of Ecological Economic, mainly working with environmental problems associated with aquaculture.