Social networks might be more important than formal institutions

Net fishermen from Chwaka Bay, Tanzania.
- Social networks might be more important than the existence of formal institutions for, among other things, effective enforcement and compliance with environmental regulations. However, all social networks are not created equal, and their internal structures do make a difference for governance outcomes.

This is one of the key messages from a recent review article published in Global Environmental Change written by centre researchers Örjan Bodin and Beatrice Crona.

- Social networks can at times be more important than the existence of formal institutions, but there is no guarantee to this. The level of influence also depends on the structure of the networks. For example, if only few ties exist among the networking actors, joint action is hard to achieve but, on the other hand, too many ties can reduce the capacity for effective collective action, says Örjan Bodin.

To date, however, most of these studies treat them either being present or absent, rather than studying the structural characteristics behind the networks. Network position and influence is one of the characteristics Bodin and Crona study.

By occupying certain central positions in a social network, they argue, actors are able to exert influences over others in the network and are better situated to access valuable information which can put them at an advantage. Such centralized networks, where a small group of actors occupy a very central position, may be better in coordinating joint action.

But who occupies these central positions, and how they utilize their favorable position, can have important implications for governance outcomes. Furthermore, possessing a favorable position may not automatically lead to higher influence.

In their study of a rural fishing village, Bodin and Crona illustrated this interplay between structural positions and formal authority. They identified two nodes of power: One was represented by the government official, the other the village chairman who had no official power vis-à-vis the state but was firmly embedded and very central in the village networks and therefore highly influential in all village matters. As a consequence, the village as a whole was highly dependent on how and if these two individuals chose to collaborate on different village matters.

Together we are stronger
Similar to how ecosystem managers strong on networking skills but low on resources can make a difference, bridging ties between different subgroups can also strongly influence natural resource governance.

The presence of bridging ties can enhance the different natural resource manager´s collective ability to mobilize various different kinds of know-how for the management of different ecosystems.

- The positive effect of bridging ties in natural resource governance extends beyond the exchange of information and knowledge. They can foster trust between previously unconnected groups such as farmers and government officials. This is crucial in natural resources governance which typically affects many different sectors of society, co-author Beatrice Crona says.

Bodin and Crona also point out that in order for social networks to develop and gain influence over decision-making processes, the relational ties must be voluntary rather than imposed upon.

- Actors in different networks will inevitably resist imposed measures and they will tend to choose their contacts based on personal references, which are often related to how similar the contacts are to the actors themselves, they say. However, although this tells us that it will be difficult to design effective networks using a top down approach, it is still both possible and desirable to provide and maintain arenas where different actors can meet and build networks to bridge different organizational and cultural boundaries. 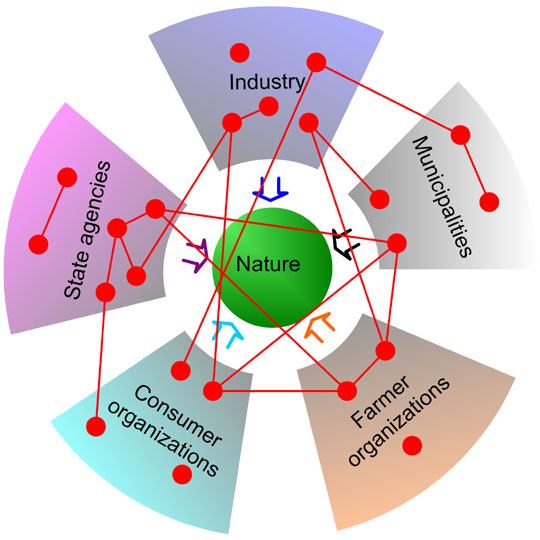 Different sectors of society involved in the use and management of the natural environment are schematically represented as different triangular slices. The red dots represent individual organizations or persons (i.e. actors) within each sector, and the lines represent relational ties among these. These relational ties can contribute to better natural resource governance by, for example, facilitating coordinated actions among different actors.