An exhibition in Spain with contributions from centre researchers looks at how the the Iberian Peninsula can deal with a changing climate.

Dealing with climate change on the Iberian Peninsula

The Iberian Peninsula is likely to be one of the most affected regions of Europe by Climate change. A new participatory installation piece - A-CORDA - has emerged from a 3-year long collaboration between artists, scientists from climate change project IMPRESSIONS and stakeholders from the Iberian Peninsula. Centre PhD student Diego Galafassi has co-lead the concept development and the installation of the exhibition.

A rope spirals upwards from a table at the centre of the room and splits in mid-air into four strands. As they stretch out towards the walls of the room the rope splits up further in a branching structure. On each side of the room, drawings by Norwegian artist Tone Bjordam represent four possible futures developed within the Impressions project knowledge and co-creation process among scientists and practitioners from various sectors of Spanish and Portuguese society.

A-CORDA is a participatory installation that invites visitors to imagine the future that may unfold and also the future one would like to create for the Iberian Peninsula. Transformative visions are required to generate the energy and momentum for change in response to climate change.

"To forge powerful transformative pathways we need to find ways to involve everyone in the project of imagining what future we want and how we will get there in the Anthropocene," says Diego Galafassi.

The stakeholders and scientists devised a set of four scenarios for the Iberia Peninsula in the context of extreme climate change. They also identified a range of transformative solutions that can lead the Iberian towards a positive and desired future. All of these elements are present and embodied in this installation. The table at the center invites every visitor to contribute with one aspect of this vision for the Iberia, what world would they like to create.

The installation was accompanied by an open-ended participatory performance titled “We are Knot” - exploring the edge of human motivation and willingness to act.

The exhibiton is presented at San Francisco Cultural Complex in Caceres, Spain during September and October 2017. Concept and installation: by Diego Galafassi and David Tàbara with drawings by Tone Bjordam. Performance by: Tiina Lehtimäki, Simon Deschaps and Diego Galafassi.

Read more about the exhibition here 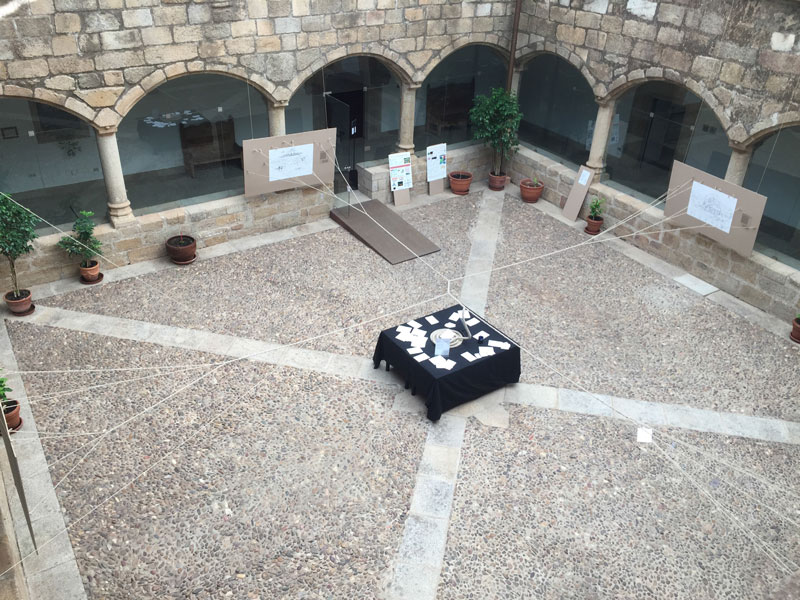 The exhibiton is presented at San Francisco Cultural Complex in Caceres, Spain during September and October 2017. Concept and installation: by Diego Galafassi and David Tàbara with drawing by Tone Bjordam. Performance by: Tiina Lehtimäki, Simon Deschaps and Diego Galafassi.

Read more about the exhibition here