A new app using a new cognitive technology called Spritzinc, gives people the essential information about climate change and how to stop it – in about 60 seconds. Go to my.earthstatement.org to learn more

Become a climate expert in less than a minute

New campaign using cognitive technology to allow people to take in far more information than ever before.

A new app makes it easy to understand the basics of climate change. Scientists have joined forces with Sweden’s leading creative agencies to launch a remarkable app to make people climate experts in less than a minute. The app is part of an international campaign called “This is my #EarthStatement”. The campaign is designed to put pressure on world leaders who meet in Paris in December to finally agree a deal on climate change.

Using new cognitive technology
Tobias Engström from the Klevgränd creative agency and founder of
Stormvarning, a collective of musicians concerned about climate, explains the technology used behind the campaign.

"We are using a new cognitive technology, Spritzinc, to allow people to take in far more information than ever before. We created an app that gives people the essential information about climate change and how to stop it – in about 60 seconds, depending on what speed you choose. We want to empower people. Anyone can become a climate expert.”

He argues that people are confused by climate science: "Some people question if it is real. Others question if we can solve it. But many of the basic facts about climate change have been established over the last two hundred years.”

About the #EarthStatement campaign
The app is part of a larger campaign called #EarthStatement. It aims to build support around the Earth Statement, a text which summarises the latest climate research and provides the essential principles of a successful climate agreement. The statement is produced by the Earth League, a group of leading scientists concerned with slow progress on climate policy.

"I am humbled that so many of Sweden’s leading design, advertising and creative agencies have come together to support researchers, says Centre director Johan Rockström. He is also chair of the Earth League.

The affiliated campaign calls for people to join forces with the prominent figures already endorsing the Earth Statement. But instead of filling in an online form, people can sign their name on their own bodies, take a selfie, share online and nominate others. 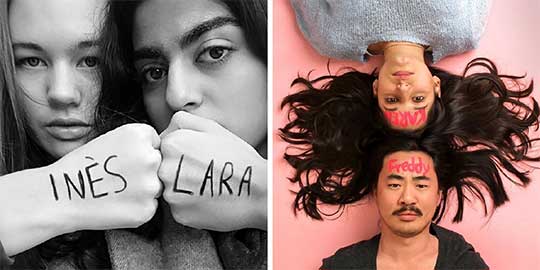 "We never imagined this could generate such great ideas. We have musicians, designers, artists, scientists, students, even the US Olympic gold medalist Julia Mancuso."

Hand-over at special COP21 event
The statement will be handed over to French political leaders in Paris at an event organized by the New York Times. The newspaper is supporting the campaign and will produce a special edition of the newspaper in Paris during the COP21 climate summit.

The special edition will have hundreds of selfies wrapped around the front cover. The Gardberg Project, a design agency, is providing the design for this probono.

The campaign is also supported by the Global Challenges Foundation.

The Earth League is a voluntary international alliance of 17 prominent scientists from world‐class research institutions, who look to work together to respond to some of the most pressing issues faced by humankind, as a consequence of climate change, depletion of natural resources, land degradation and water scarcity.

Centre director Johan Rockström is Chair of the Earth League.