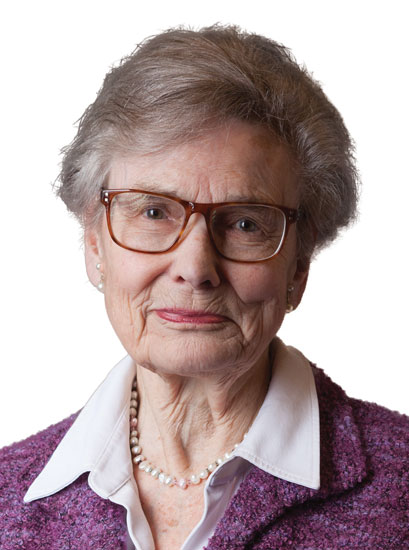 Falkenmark is a future-oriented and interdisciplinarily water-related scientist, whom has published her work extensively in academic journals (some 25 articles co-authored with Johan Rockström). Her SRC-interests focus on landscape hydrology, ecohydrology, hydrosolidarity and water resilience. The latter was realized in a multi-author book, “Water resilience for human prosperity” (Rockström et al 2014).

In the mid 1980’s she introduced what has become a global yardstick for assessing water scarcity, the “Falkenmark index.” This was later followed by several pedagogical ways of framing the global water challenge, including “water crowding”, a log-log diagram that in two dimensions simultanously clarifies water scarcity predicaments, as well as green and blue water, now influencing work beyond the scientific arena, such as in policy discussions on integrated land-water resources management. Her green water analyses have been followed up by four generations of SU PhD dissertations (Johan Rockström (1997), Line Gordon (2003), Elin Enfors (2009), Patrick Keys (2016)). She is currently focussing on Sub-Saharan Africa’s water predicament, with focus on green water.

Falkenmark’s educational background is typical for the first generation of a new scientific sector: Fil Mag in mathematics, physics, chemistry, mechanics 1950 (Uppsala University); and Fil. Lic. in Hydrology where she studied “Bearing capacity of an ice sheet” (Uppsala University). Since 1986, she has held the position of Professor of Applied and International Hydrology.

She has supervised a number of PhD students, and has also contributed to studies at Lund University’s Technical Water Resource Dept, (1970’s); Linköping University’s Water and Environmental Studies Department (1980-90’s); and Stockholm University’s Department of System’s Ecology and the Stockholm Resilience Centre (1991-current).

She is also currently the senior scientific advisor to the general director of SIWI.

Some 20 of her most influential articles have been assembled in a five-section SRC-reader, ”New thinking on global water security: towards an ecohydrological perspective” (1. Land-water environment, 2. Water security, 3. Water pollution, 4. Water for food, 5. Water policies).

Fresh water—the bloodstream of the biosphere—is at the center of the planetary drama of the Anthropocene. Water fluxes and stores regulate the Earth's climate and are essential for thriving aquatic and terrestrial ecosystems, as well as water, food, and energy security. But the water cycle is also being modified by humans at an unprecedented scale and rate. A holistic understanding of freshwater's role for Earth system resilie...

This article highlights green and blue water functions in the densely tied global water network, stabilizing the life support system and generating ecosystems and ecological services. Essential water challenges of the next half century are analyzed, identifying low-latitude dryland vulnerability and sharpening hydro-social water constraints. Attention is drawn to global warming, and the crucial roles of water and agriculture i...

Understanding of water resilience in the Anthropocene

Water is indispensable for Earth resilience and sustainable development. The capacity of social-ecological systems to deal with shocks, adapting to changing conditions and transforming in situations of crisis are fundamentally dependent on the functions of water to e.g., regulate the Earth’s climate, support biomass production, and supply water resources for human societies. However, massive, inter-connected, human interferenc...

This article addresses the need to profoundly expand the way we think about freshwater. Stressing water’s role as the bloodstream of the biosphere, the article highlights water’s functions in sustaining life on the planet (control, state and moisture feedback functions), the role of water partitioning changes in inducing non-linear change at multiple scales, and humanity’s influence on a social-ecological system’s capacity to ...

See all publications with Falkenmark, Malin